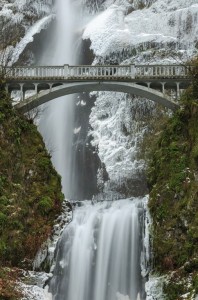 Winter at Multnomah Falls, OR

OK, the first sentence of this blog, which I drafted several weeks ago, was this: “as we start a New Year I plan to write  more regularly.” It is pretty obvious that I have already not moved forward in this area. For longer than I wish to admit, projects, large and small, have been lying dormant on my desk.  I admit, sadly, major distractions in the world have been my excuse. I would sit down to write and not have anything to say! Well, I had lots to say, but I was pretty sure no one would want to hear me or read my ranting. Then December arrived and our Golden puppy died. Just like that! One day he stopped eating and a week later he was gone. Needless-to-say, lots of time since has involved thinking about and being sad about him.

I woke up one morning with him on my mind and sadness again swallowed me. As I was remembering Tobey, I also could hear the voice of my college voice/singing teacher, Carl Gutekunst, “Never lean on a weakness.” He declared often that he never “leaned on a weakness.” He was in his mid-70’s and had never missed his trip from New York City to Ithaca, New York due to sickness or weather; he traveled to teach at Ithaca College two days each week, from September through May. Tobey had been gone just about a month and I was still finding myself in despair whenever I would think of him. Now I am realizing that the time has come to NOT “lean on this weakness.” It is time to begin a new practice of recognizing the grief, of saying hello to it and then stopping, exhaling, and breathing as the wave passes. It is inevitable there will be many of these moments in the weeks and months to come. Each of us has a vocabulary we use to pardon ourselves from situations and challenges. Not leaning on a weakness can become an important phrase in that vocabulary. By recognizing the behavior, it is possible to stop, to become unstuck and to finally move on.

I received a marvelous calendar for Christmas; it is one of those where one page tears off each day to reveal some meaningful thought to ponder or do that day. These daily invitations are inspirational and practical ideas which can motivate  and keep me from  being enveloped in grief, or giving way to the challenges before me.  This week check in with yourself and determine if you are leaning on some kind of weakness which is holding you back from moving forward. Pause-Exhale-Breathe! Move on!