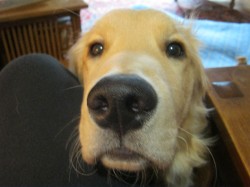 One of the 3 principles of the Alexander Technique is inhibition, that is, to STOP! Simple, right? We recognize something is not working and we stop. Slam-Dunk-Done!!

I was watching our 22 month old puppy, Tobey. Mostly, he does not know what stopping or inhibiting means, in any way. He’s all forward to go! In one very surprising way, though, he exhibits the principle brilliantly. He has one small orange ball which he loves to chase and fetch inside the house. It’s simple. I toss the ball; Tobey STOPS! What’s that all about? He actually sits and waits without being told. He simply does not react to the ball toss. Instead, he watches to see where the ball goes and waits to see where the ball will end up, where it will stop. After the ball stops, he runs after it.

How often do we humans practice the art of inhibition? In life, how often do we wait to see where the “ball” stops before we chase it? What would happen if the next time the phone rings you wait and answer only after the third or forth ring? Or, the next time you are late instead of getting anxious and rushing off, you STOP, BREATHE, and then proceed? In that moment of pausing, between a stimulus and response, we regain the ability to choose what we do next. In that one second of inhibition, stopping, the solution just may come. Tobey knows that if he waits the ball may roll back to him, so he waits. We can learn also that if we wait, the “ball” just might roll back into our own court. Rather than chasing after it, in the pause, the decision, choice, reveals itself. Will you pause today?